You are here:
Company NewsFeaturedPress Releases 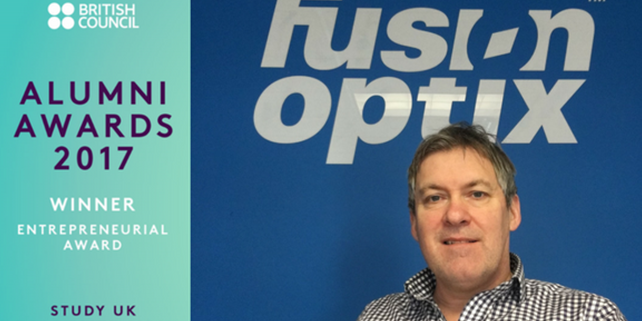 Woburn, MA – March 31, 2017 – The British Council announced today that Dr. Terence Yeo, a graduate of the University of Cambridge and Loughborough University, has won its coveted Entrepreneurial Award in the United States. The Award is one of three British Council Awards presented annually in each of 14 countries to celebrate the outstanding achievements of alumni who have studied in the UK at degree level or above within the last 15 years. More than 1200 alumni of 125 UK institutions were nominated for the three Awards across 14 countries.

Dr. Yeo received the award for his work as Founder and CEO of Fusion Optix, a world leader in LED lighting and optical technology based outside Boston in Woburn, MA. He founded Fusion Optix in a rental house in Cambridge in 2003, shortly after receiving his MBA.

About the British Council

The British Council is the UK’s international organisation for cultural relations and educational opportunities. It creates friendly knowledge and understanding between the people of the UK and other countries. Using the UK’s cultural resources the British Council aims to make a positive contribution to the countries we work with – changing lives by creating opportunities, building connections and engendering trust. It works with over 100 countries across the world in the fields of arts and culture, English language, education and civil society. Each year we reach over 20 million people face-to-face and more than 500 million people online, via broadcasts and publications. Founded in 1934, the British Council is a UK charity governed by Royal Charter and a UK public body. The majority of its income is raised delivering a range of projects and contracts in English teaching and examinations, education and development contracts and from partnerships with public and private organisations. Eighteen per cent of its funding is received from the UK government.

About Fusion Optix
Fusion Optix is the only company serving the lighting industry that possesses both advanced optical component and LED light engine production capacity in-house. Fusion Optix is recognized as one of the fastest growing companies in the USA and has ranked on the Deloitte Fast500 Technology, Inc5000, and Red Herring Top100. The company has a record of accomplishments as a leading, and trusted, supplier of enabling components and technologies for LED lighting applications. Our customers include some of the world’s most recognizable brands and we are inside products used every day in business, industry and the home, as well as demanding scientific, medical, military and aerospace applications. We are a privately held company founded in 2003. Our manufacturing facilities and company headquarters are in Woburn MA.